Was real estate on Santa’s nice list in 2013, you bet it was! 2013 was the 2nd consecutive year where home values increased both local and nationwide.

What’s driving these numbers? A combination of lower interest rates and reduced inventory of available homes are the obvious conclusions that most point to. However what’s most interesting is that prices have actually fallen too far statistically. As of late 2011 the market was considered over-sold as related to its long term appreciation trend lines, and also the home affordability index reached its lowest point on record as the chart below shows at the end of 2012. When markets get into these over-sold (or over-bought) conditions they tend to make a move back to their “normal” trend lines. 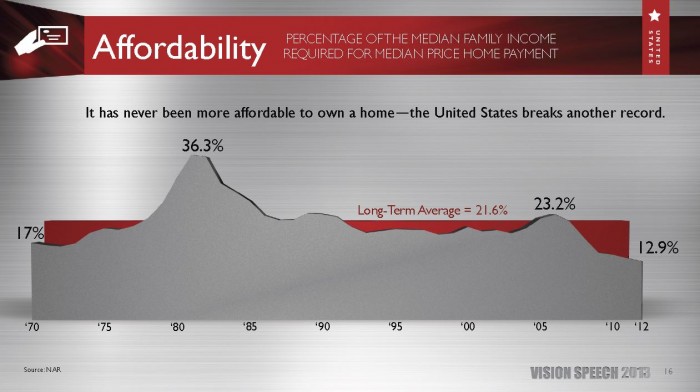 What Does this mean for real estate in 2014? Will the market continue to be positive for prices and affordability? The indicators would suggest there is room for increases in price and stabilization as long as the current underpinnings of low interest rates and moderate inventory continue. Consumer outlook for the economy and unemployment also play a big factor in housing. Seeing improvements in those indicators are equally important.

Real estate is of course locally driven and varies greatly from town to town. To learn more about your specific town, call/contact us now.